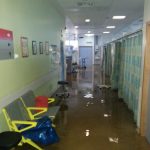 IMPACT Trade Union has revealed that Letterkenny hospital workers have still yet to be paid compensation for the loss of personal items destroyed in the massive flood of the hospital in July 2013.

The union has said that many workers suffered damages to personal clothing and shoes as they attempted to save patients and relocate them to safety from the flooding that destroyed huge areas of the hospital.

Union spokesperson Richy Carrothers says the HSE has been paid the money from the insurers and it's unfair that it has not yet been passed on to staff: