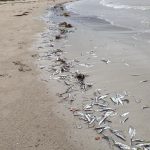 Donegal County Council has described the deaths of thousands of fish washed up on Tramore Beach in Downings as a "natural occurrence".

The dead fish were photographed yesterday.

In a statement, the council says "It was discovered that dead sprat had washed up at one particular point of the beach. This is believed to have been a natural occurrence and removal by tidal movements and natural predators has, and will continue, to effect a clean-up of the beach."