A torrential downpour has caused flooding at Letterkenny General Hospital.

The downpour began shortly before 7pm on Tuesday night.

The car park to the front of the emergency department was flooded. Some water managed to enter the Emergency Department but treatment areas were not badly effected.

Flood preventative measures had been put in place following last years devastating floods but eyewitnesses says the flow of  water came from a different direction.

As of 9pm, much of the water at the front of the hospital has been removed - it seems the worst of the flooding is over. 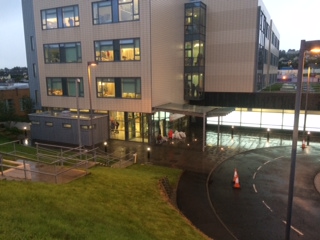 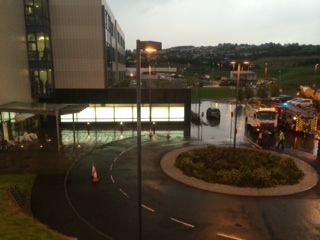 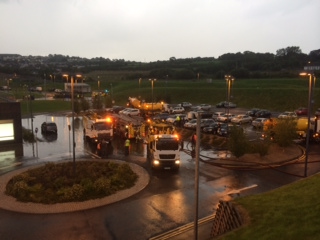 Councillor Gerry McMonagle was at the scene - he has praised those who prevented further damage to the hospital but says questions need to be asked as to how this could happen again:

Meanwhile an area at the Oatfield was flooded, cars have been trapped by water at Thornberry and part of the main Kilmacrennan to Letterkenny Road at Calhame was washed away. The High Road and Glencar area also witnessed severe flooding.

The road between Buncrana and Burnfoot has been seriously flooded. Council are at the scene, gardai are asking motorists to exercise care.