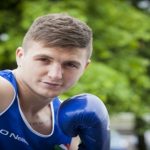 Derry's Connor Coyle guaranteed himself at least a bronze medal at the Commonwealth Games after beating his South African opponent in the middleweight quarter final last night.

The St. Joseph's ABC boxer won on a unanimous decision against Siphiwe Lusizi - and the victory ensures the Northern Ireland team add to their growing medal haul.