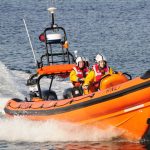 A 23 years old man has been airlifted this afternoon to hospital following a fall on Edernish Island off the Burtonport Coast.

The man sustained suspected spinal injuries in a minor fall and was taken from the island to Burtonport by the Arranmore Lifeboat.

He was transferred from there by ambulance to the Dungloe GAA pitch where an Aer Corps chopper from Shannon removed him to Letterkenny General.

Press Officer for the Aranmore Lifeboat, Nora Flanghan, said the lifeboat was straight on the scene: