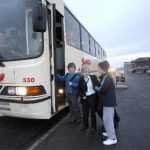 Bus Eireann has extended the deadline for applying for the school transport scheme and set up an emergency number for people experiencing difficulties.

Initially, applications were only being accepted online, but Fianna Fail transport spokesperson Charlie Mc Conalogue says that was excluding a number of eligible people, particularly in remote areas such as Donegal.

He's welcoming the extension of the deadline from this Friday to Friday August 1st, and says Bus Eireann must now start accepting applications by post..........

Bus Eireann says postal applications will be accepted, but the move towards an online system has been led by customer demand.

Meanwhile, a helpline for pweople having difficulty with the online application process opens this morning, it can be contacted at 1800 945 945