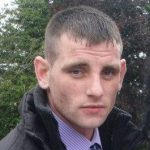 A 28-year-old man whose body was discovered in the River Finn yesterday evening has been named as Eddie Gildea.

It's understood that the 28-year-old Letterkenny man lost his footing and fell into the river.

The Malin Head coastguard then received a call from gardaí shortly after 11.30am informing them that a man had entered the water at Salmon Leap, near Ballybofey.

The local rescue helicopter based in Sligo was tasked and carried out a search at the scene of the incident but was later stood down as conditions were not suitable to an air search.

Gardaí and members of the Sheephaven Sub Aqua Club search recovery unit, based in Downings, Co searched in difficult conditions due to rough waters in what is a fast-flowing river.