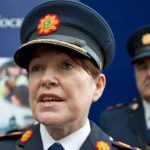 The acting Garda Commissioner has suggested the number of Gardaí within the force is too low.

Noirin O'Sullivan says it's "challenging" to maintain a full policing operation with the current numbers within the force.

And Noirin O'Sullivan told the MacGill Summer Shool in Glenties this evening that the ongoing fall in numbers is an issue...........