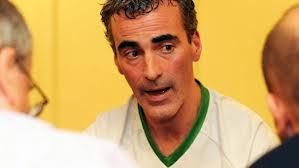 Donegal are Ulster Football champions once again after deservedly beating the holders Monaghan by 0-15 to 1-09 in a robust game in Clones.

Odhran MacNiallais and Colm McFadden were to the fore while Michael Murphy scored a breathtaking long-range free late on to put the issue beyond doubt. Ryan McHugh was impressive in the closing stages.

Karl Lacey, who started contrary to some pre-match team news, actually got the first score of the game.

Substitute Chris McGuinness gave Monaghan some hope with a second half goal to narrow the deficit to just one point at one stage in the second half but Donegal injected more momentum again and were never seriously in real bother.

It was a great day for Donegal fans in a crowd of over 31,000 - earlier many of them had cheered the Donegal minors to a provincial title success as they overcame Armagh by 2-10 to 0-9.

Monaghan will face Kildare in the Qualifiers.

Afterwards, with the crowd audible in the background for the presentation ceremony, Jim McGuinness gave his reaction.