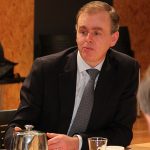 Details have emerged that a homecoming is to be held this evening for Donegal Deputy, Joe McHugh after he was named as the new Junior Minister for the Gaeltacht.

Minister McHugh will arrive in Lifford at 7 o'clock, and is due at his Letterkenny Constituency Office at 8 o'clock, where he will meet and greet supporters and party members.

He will then travel to Downings via Kilmacrennan, Termon and Glen Village, arriving at the Beach Hotel at approx 9:45 tonight.

Joe McHughs appointment has caused much controversy this week after he admitted that his own Irish was not up to scratch.

There have been various calls for the Taoiseach to reverse his decision.