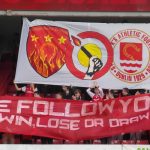 St Patrick’s Athletic produced a great performance in their UEFA Champions League Round Two qualifier as they earned a 1-1 draw away to top Polish side Legia Warsaw.

But Legia struck late through Miroslav Radovic to level the scores in the 90th minute.

The teams meet at Tallaght Stadium next Wednesday for the second leg.

The Polish side has an annual budget of around €50 million and has seven international players on its books.

However, the great result was dampened by the news earlier in the day that a London-based Saints fan had been found dead in a hotel in Warsaw.