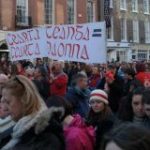 Éamon Ó Cuív has raised concerns that Joe McHugh is not a fluent Irish speaker.

The Donegal North East TD - who is from outside the Gaeltacht area - says he will take a "refresher course" in the language in the coming weeks.

But Deputy Ó Cuív says it's worrying that the Minister may be unable to take part in media discussions and debates as Gaeilge...................

During questions to Arts, Heritage and thwe Gaeltacht Minister Heather Humphries, who is not an Irish speaker, Deputy O'Cuiv directed a question in Irish to MInister Mc Hugh about Ferry services on the Aran Islands.

The Ceann Comhairle Sean Barrett intervened, and the question was answered in English by Minister Humphries.................

A number of protests are now being planned, Conradh na Gaeilge will protest this afternoon outside the Taoiseach's office, while a protest takes place outside the Department of the Gaeltacht offices in Gweedore on Friday at noon.