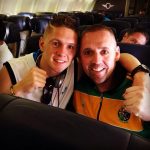 Jason Quigley will have his second professional fight on August 16.

The Finn Valley man confirmed on his Twitter account this morning that he will compete in a middleweight four-rounder on the undercard of the IBF welterweight title showdown between Kell Brook and Shawn Porter.

Quigley won his first professional bout were he floored Howard Reece at the MGM Grand on Saturday in 82 seconds.

Donegal News Sports Reporter, Chris McNulty says at this stage it's not known who Jasons next opponent will be, but there's no doubt it'll be a step up in class: