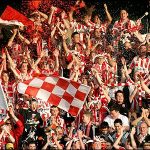 St Patrick's Athletic are in Poland this evening where they're taking-on Legia Warsaw in the first-leg of their second qualifying round tie.Pats boss Liam Buckley has set his players the target of getting something out of tonight's game to keep themselves in contention for the second-leg in Dublin.

On Thursday, Derry City go into the first leg of their Europa League qualifier against Shakhtyor Soligorsk on the back of a seven-game unbeaten run.

City boss Peter Hutton says "the players are playing with a swagger and a smile" on their faces.