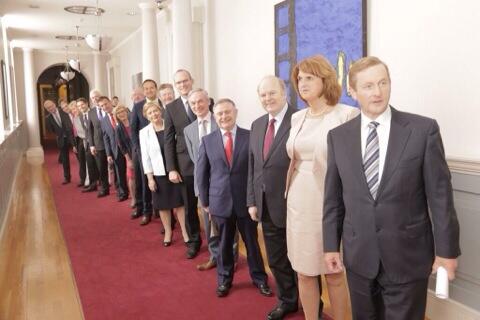 The Taoiseach says the Cabinet reshuffle is about showing people they can get on with their lives without keeping their heads down and just surviving.

Enda Kenny's replaced a third of the Cabinet and brought a first-time TD straight into Government.

Tánaiste Joan Burton says they will work with head and heart to deliver the benefits of recovery in people's lives.

After a few delays Enda Kenny finally got to announce the Cabinet at twenty to two this afternoon.

It was out for Jimmy Deenihan, Phil Hogan, Eamon Gilmore, Pat Rabitte and Ruairi Quinn.

Enda Kenny's promoted Paschal Donohoe to Cabinet to Transport, Tourism and Sport and in a bigger surprise is bringing first time TD Heather Humphries into the Government as Minister for Arts, Heritage and the Gaeltacht.

Leo Varadkar will move to Health, with the Department of Children becoming the new home for James Reilly who will take over from Charlie Flanagan who's only been in the job for a short time.

The Laois Offaly TD moves to Foreign Affairs and Trade.

Richard Bruton has held on in Jobs, as has Simon Coveney in Agriculture who also gets the Defence portfolio.

Ged Nash also becomes the super junior in the Department of Jobs with the title Minister for Business and Employment.