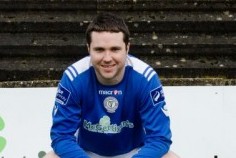 Finn Harps have announced that midfielder Mark Forker has left the club.

The Ex-Heart of Midlothian midfielder made his first team debut against Kildare County in March 2009 and went on to make a total of 105 appearances scoring 4 goals.

Manager Ollie Horgan told finnharps.com “We accept Marks reasons for seeking pastures new and wish him the very best in his future career . He has always being a very popular lad with everyone at Finn Park and on behalf of everyone at the club I would like to thank Mark for his contribution to Finn Harps during his time here.”