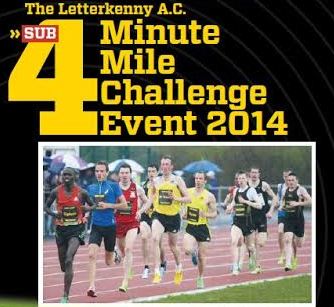 This event follows on from last year’s success where we witnessed exceptional performances from a host of world class athletes at the official opening of the Danny McDaid Athletics Track. The fields already assembled for the track and field programme are showing signs that this will be one of the highlights on the Irish athletics calendar for 2014, and the organisers will be hoping for the first sub 4 minute mile to be run on Donegal soil. Olympic and World finallists, Commonwealth medallists, European champions will all be on show in Letterkenny.

The feature event is the Arena 7 Mens Mile. This race will include seven sub 4 minute milers, along with a host of athletes who are on the cusp of the magical 4 minute barrier. USA’s Craig Miller, Tommy Schmitz, Matt Elliott, Eric Finan, Kyle Merber and Jon Peterson will be taking on Kenya’s Vincent Mutai, Mexico’s Juan Luis Barrios, New Zealand’s Hamish Carson, Belgium’s Ali Hamdi and Gibraltar’s Harvey Dixon. Ireland’s challenge will be led by Letterkenny’s own and Commonwealth Games bound Danny Mooney, who will be looking to upset the odds with a hometown victory. The Tobin’s Mens 800m will feature European Junior champion from 2013, Patrick Zwicker of Germany with a personal best of 1:46, who will go up against Kenya’s Reuben Bett with a personal best of 1:44, along with Letterkenny’s Ruairi Finnegan.

The Voodoo Lounge Womens 800m is shaping up to be one of the races of the day with three Commonwealth Games bound athletes set to feature: Northern Ireland’s Katie Kirk and Scotland’s Emily Dudgeon will be challenged by double Commonwealth Games silver medallist from 2010, New Zealand’s Nikki Hamblin, who comes with a personal best of 1:59. USA’s Emily Lipari, Canada’s Celia Peters and Scotland’s Hannah Tarver will also be looking to break the sub 2 minute barrier, and will ensure that the pace will be fast for this exciting two lap event. The Hickey, Clarke and Langan 3000m will feature USA’s Addie Bracy and Clerc Simpson, and the local challenge will come from Lifford’s Anne Marie McGlynn, fresh from representing Ireland at the European Team championships last week.

The Donnelly Foley Men’s 100m will have American Philip Redrick and Kenya’s sprint sensation Carvin Nkanata, who will also double up in the Letterkenny Credit Union Mens 400m. He will be challenged by 18 year old Machel Cedenio of Trinidad & Tobago who has a personal best of 45.23, and Scotland’s Patrick Swan. Craig Lynch will lead the Irish charge in the 100m and 400m. A host of up and coming Irish sprinters will feature in the Spar Glencar Womens 200m. The track and field programme will also feature the Donegal Daily/County Seat Womens Long Jump, the 4 Lanterns Mens Javelin, and the Letterkenny Glass/McGee Memorials Mens Shot Putt. The action gets underway at the Danny McDaid track at the Aura Leisure Centre at 2pm, and it will be a day of world class athletics not to be missed.