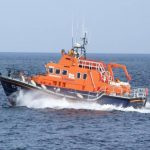 The Aranmore Lifeboat today went to the asssistance of two yachts, both believed to have been taking part in the Round Ireland Yacht Race.

The first call out involved a yacht with a damaged boom on which two sailors sustained minor injuries, the second had a damaged main sail, and requested an escort into port.

Nora Flanagan of Aranmore Lifeboat has been speaking about the call outs and the lifeboat's response this afternoon.......

Meanwhile, Killybegs Coastguard has brought another dinghy to shore after being tasked by Malin Head Radio Station.

On Monday evening, a member of the public reported a small inflatable vessel at sea with two persons on board neither wearing lifejackets. The dinghy was returned to Killybegs.