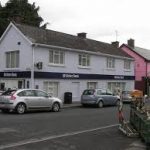 Ulster Bank is to close its sub-office in Lifford.

It's one of 7 branches and 3 sub offices around the country.

The plans were outlined to staff today and also include plans to shut 5 branches North of the border in Belfast, Newtownabbey and Hillsborough.

Last year the bank closed 11 separate locations in the Republic

Up to 70 staff will be affected North and South of the border, but Ulster Bank say they don't expect redundancies.