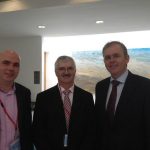 The Chair of Strabane District Council has urged the Oireachtas Committee on the Implementation of the Good Friday Agreement to become champions for the upgrade of the A5.

Committee members are being briefed on the most recent developments regarding the route, with hopes that it can be progressed over the next 18 months after a suspension brought on because of a legal challenge.

The meeting is being attended by councillors and officials from Donegal, Derry, Strabane and Omagh, as well as West Tyrone MP Pat Doherty.

Addressing the meeting, Strabane Council Chairman Dan Kelly said the A5 is vital for the economy of the North West, and the committee has a role to play in supporting that............