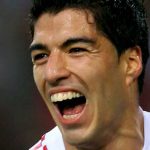 Liverpool striker Luis Suarez is at the centre of another biting controversy.

FIFA have opened disciplinary proceedings against him after the Uruguayan appeared to bite Italian defender Giorgio Chiellini in the World Cup match between the two countries last night.