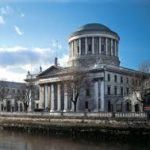 A music student who was rear ended in her car on her way to conduct a children's carol concert is suing the other driver for damages.

The High Court's heard Hazel McGarrigle of Drumstevlin House, Donegal was just 25 at the time of the collision.

The action is against Breda Broderick of Sycamores, Classes Lake, Ovens, Co Cork.

Hazel McGarrigle was a masters student at Cork school of Music.

She also had a part time job at a local primary school.

The court has heard on December 16th 2009, she was on her way to conduct the children's carol service when her car was rear ended by another car at Carrigaline.

She suffered a traumatic brain injury in the crash which has severely restricted her life.

The court heard four years on the 29 year old is in a wheelchair and is fed through a tube.

This action for damages against the other driver is being taken on her behalf by her father Noel and is expected to last up to 3 weeks.