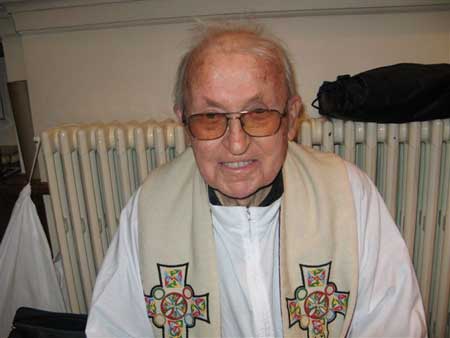 Father Ambrose o'Gorman Ireland's oldest living priest has died. He was born a fortnight after the Titanic sank and said in the past that his most treasured memory was the summer's day in 1940 when he returned home to Ballyshannon after being ordained in England and the whole town had turned out to greet him. Fr Ambrose had made it into the priesthood then aged 28 he was born in Kilmacrennan in 1912, one of seven children. His father, Michael, from Tubbercurry in Co Sligo, was in the RIC and lost his job when Partition was announced. His four brothers and two sisters were friends with  Hazel Blair mother of former British Prime Minister Tony Blair, who lived next door. Father Ambrose wrote a letter to Mr Blair about his memories of his mother, and Mr Blair responded with a letter of thanks. In later years he ministered to the Irish in London, becoming President of the Donegal Association in the city.
He retired to Ballyshannon before moving into the Shannagh Nursing Home in Belleek. Secretary of the residential home Deirdre Gallagher joins the Shaun Doherty Show to discuss.