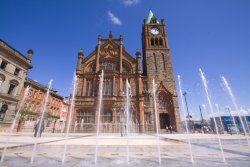 The First Meeting of the Shadow Derry City and Strabane District Council will take place in Derry's Guildhall this evening, with the council set to approve its standing orders and elect a Chairperson and Deputy Chair to oversee the transition.

The forty councillors elected to serve on the new Derry City and Strabane District Council will this evening be asked to approve draft standing orders, and elect a Chair and Deputy Chair, as well as appoint
representitives to four committees.

Appointments to committees should be made according to the proportion of the vote received by the parties in last month's election. That means Sinn Fein have 40%, the SDLP have 25%, the DUP have 20% and the Ulster Unionist Party has 5%. The remaining 10% is shared by four independents.

The new council will act on a shadow basis , while the current Derry City Council and Strbane District Councils continue to run their respective districts on a day by day basis.

The new council will take over formal responsibility for the new extended district on April 1st next year.