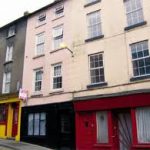 The number of vacant commercial premises in Donegal is still above the national average according to first quarter figures published by GeoDirectory.

With a vacancy rate of 13%, that's an increase of .6% over the same period last year, showing vacancy continues to be a significant issue in the county.

With a vacancy rate of 13%, against a national average of 12.4%, Donegal is one of 13 counties to record a higher than average percentage rate.

It's an issue across the North West, Sligo has the highest vacancy rate in the country at 16%, Leitrim is at 15.3%.

4.1% of the country's vacant address points are in Donegal according to the GeoDirectory figures, the joint fifth highest level in the country after Dublin, Cork, Galway and Limerick.