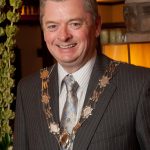 The announcement has been made by Eugene Mc Keever, Managing Director of the Mc Keever Hotels Group which bought the hotel on Letterkenny's Main Street last month.

Mr Mc Keever says the inside of the hotel is being rebuilt and remodelled, and the rebranding of the hotel reflects his desire to tap into the local market.

He and his colleagues believe the hotel has huge potential, and the current renovations will be followed by a rebranding, backed by a significant marketing campaign................