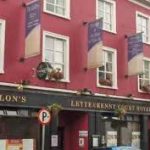 Twenty seven new jobs will be created as one of Letterkenny’s most popular hotels undergoes a major €500,000 facelift.

The Letterkenny Court Hotel has been bought by McKeever Hotel Group, which plans a major refurbishment in the coming months.

The company says all 30 staff jobs will be retained and an additional 27 people will also be recruited including a senior post for a general manager.

Work on the €500,000 renovation of the ground floor of the three star hotel has already started.

Managing Director Eugene McKeever says the Letterkenny Court Hotel is in a great location and has huge potential.

In September further work will be carried out on the 57 bedrooms and 26 apartments."