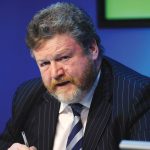 He was speaking during a Fianna Fáil motion in the Seanad calling for the protection of obstetrician-led maternity services at regional hospitals.

It follows claims that a HSE internal report proposes to dismantle obstetrician-led maternity services in the West and North West region.

The motion is in the name of Senator Marc Mc Sharry was co-signed by Senator Brian O'Domhnaill.

He rejected claims of scaremongering and called on the Minister to give a firm commitment to increase staffing in Maternity Units: