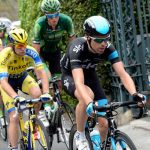 Donegal's Philip Deignan has claimed a podium finish during today's 18th stage of the Giro d'Italia.

The Team Sky rider showed his skills as a climbing specialist after finishing in third place during today's mountain stage.

The Letterkenny man finished just 37 seconds behind Colombian Julian Arredondo who took another giant step towards claiming the King of the Mountains jersey for this year's race after crossing the line first ahead of his compatriot, Fabio Duarte.