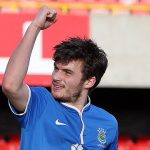 Lowry, from Limavady, was out of contract. He joined Linfield from Institute five years ago.

He will not be eligible to play for Derry City until July because of the transfer window.