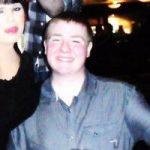 A St Johnston Priest has said that the village has been left devastated by the death of 22-year-old Oisin Crawford.

Mr Crawford died in a flat at Main Street, in St Johnston, in the early hours of yesterday morning.

It is believed he died during a party and that four of his friends were taken to hospital. Three of them have been released, while the condition of his Simon Lynch, who was in an induced coma yesterday, is said to be improving.

Local Priest Fr Dan Carr says the village has been left stunned by the tragedy: