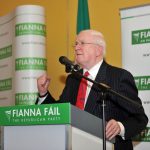 Pat The Cope Gallagher says he is still hopeful about his prospects of securing a Euro parliament seat in the Midlands North West constituency, with a first official count not expected until lunchtime.

Luke Ming Flanagan is expected to romp home with the first seat, and Mairead McGuinness is thought to be a shoo-in for second.

The third seat is less predictable, but it's expected to go to Sinn Fein's Matt Carthy - with the fourth heavily reliant on transfers. It seems that it will be between Pat the Cope Gallagher of Fianna Fail and Independent Marian Harkin.