According to tallies, Seamus O'Domhnaill will top the poll in the Glenties electoral area.

The Fianna Fail rep, who ran last time as an independent will retain his seat having secured 14.6% of first preference votes.

The area had a turnout of 58.2% and should see Marie Therese Gallagher returned a a councillor.

Independent Micheal Chlom Mac Giolla Easbuig can also be confident with 755 first preferences or 6.8% of the vote as will Seamus Rodgers with 784 firs preferences. Also in the mix will be Michael McClafferty (896) and Ian Molloy (864).

Eliminiations and transfers will be crucial in finalising matters in Glenties when the counting of votes gets underway at the Highlands Hotel at 9am Sunday. 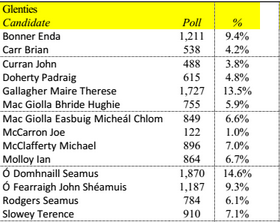