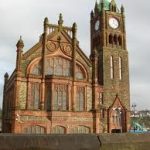 Derry's Guildhall building has been named Best Conservation Project at the Royal Society of Ulster Architect awards in Belfast.

The Consarc Design Group were the lead consultants on the £10 million regeneration project which has transformed the landmark building, enhancing its historical features and creating a bright and open public space featuring a new café, tourist information point and exhibition area.

This is the second major award for the project, having been honoured by the Royal Institute of British Architects last month.