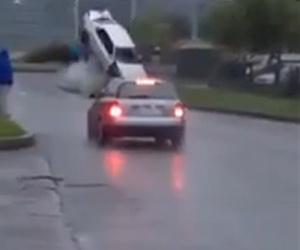 A video taken at a modified car rally in Dublin featuring a car attempting to knock over street lights has emerged.

The video has gone viral since and questions have been raised as to whether a further clampdown by gardaí is needed on these events.

It is understood that it was filmed at an industrial estate in Ballymount at what has been described as a ‘legal modified car meet’.

Concerns are growing in the local area over the dangerous nature of these events.

The video features a car driving at speed into street lamps, almost knocking them over, while traffic on a public road passes by.