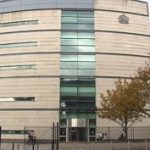 Three men from Derry caught with a mortar in the city in 2012 have each been sentenced to 10 years imprisonment at Belfast Crown Court.Police stopped a car at Westway in the Creggan area on the evening of 6 December. During a search of the vehicle, officers found a holdall containing a home-made Explosively Formed Projectile (EFP). Police believe this item was intended to be used in a dissident republican terrorist attack. Car driver Jason Ceulemans (41), of Coshowen, passengers Damien Harkin (48) of Westland Avenue, and Neil Hegarty (49) from Benevenagh Gardens were all sentenced to 10 years imprisonment for possession of explosives and 4 years imprisonment for possession of items for use in terrorism. Both sentences are to run concurrently. When their car was stopped, all three men were dressed in dark clothing; Harkin and Hegarty were wearing two pairs of gloves, one over the top of the other. All three pleaded guilty last month to possession of an EFP with intent to endanger life and to having items for a purpose connected to terrorism.A spokesperson from Serious Crime Branch said: “We should all be thankful that those in possession of these items were prevented from using them and the actions of police undoubtedly saved lives. Police will continue to combat the threat posed by dissident individuals and groups who plan to use violence to further their agendas.“We would encourage people in the community to continue to work with us to reduce the threat posed by such reckless individuals so that we can bring them before the courts and keep our communities safe.”