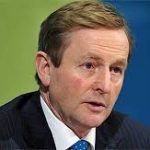 Taoiseach Enda Kenny was in Donegal this morning for a number of engagements.

He  turned the first sod of the 4.5 million euro North West Science Park at Letterkenny Institute of  Technology, before traveling to the new Colaiste Ailigh building at Carnamuggagh, which he officially opened.

The North West Science Park is a cross border venture, with campuses at Fort George in Derry and the CoLab facility at Letterkenny IT.

Speaking ahead of the sod turning this morning, LYIT President Paul Hannigan said it's a very important day for the college and the county......