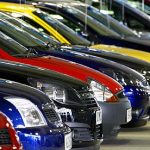 Figures show that new car sales in Donegal saw an increase of 32.9% in the first quater of this year.

The Donegal figure is above the national average increase of 27%.

The review, compiled by economist Jim Power using data from SIMI and DoneDeal, looks at all aspects of the motor industry and the socio-economic impacts on the area over the past several years and specifically for the first quarter of 2014.

Dublin saw the lowest increase in growth, just 16.6% but Dublin represented 36.4% of all new car sales in the 1st quarter.