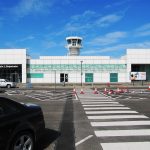 City of Derry Airport could be facing strike action next month after two unions at the airport decided to ballot members on industrial action.

This afternoon, representatives of both NIPSA and Unite attended a joint meeting of members which unanimously backed a call for a ballot.

The unions say the action will oppose recently announced redundancies at the airport, the failure of management to consult trade unions on the proposals, and call for a halt to what they claim is the ongoing managed decline of the airport.

NIPSA official Alan Law says the airport is suffering as a result of the management contract with Regional & City Airports Management Ltd.