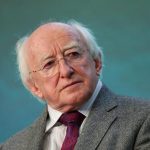 It's been confirmed that President Michael D Higgins will visit Buncrana in September to present the 2014 Tip O'Neill Irish Diaspora Award.

It was confirmed last week that this year's recipient will be Senator Therese Murray, President of the Massachusetts State Senate.

Her nomination has been widely welcomed in Donegal and further afield, with Taoiseach Enda Kenny saying she has had a long standing interest in, and shown support for economic development in Ireland.