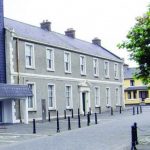 An Independent candidate in the Donegal Electoral Area sys there needs to be a major overhaul of local government funding, and how taxes raised in the county are spent.

Lawrence Mc Manus from Pettigo says the issue was brought home to him when he realised that there is a severe problem with illegal dumping in Donegal, while just a short distance from his home in County Fermanagh, there are free recycling facilities and illegal dumping is not an issue.

He says that reflects the fact that councils in the North have the power to raise their own rates, which are then used to fund local services, and people see what they are getting for their money.

He says the situation here is very different........