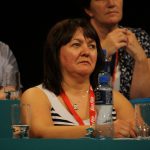 14 jobs are to go in Strabane with news that Quantum Hosiery is to transfer its operation to England. The company took over Adria when it closed, and kept a number of high end administrative jobs in Strabane.

Local MLA Michaela Boyle says this is a major blow for the town and its environs, and represemts the final nail in the coffin for what was once Strabane's biggest employer.

She and West Tyrone MP Pat Doherty have written to Quantum asking them to re-think this decision, and she says they are also seeking a meeting with the head of InvestNI to receive an update on the Strabane business park which remains empty.

She says the loss of these jobs makes the situation even more urgent...........