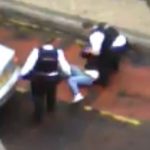 The woman who was recorded being left at the roadside by police in Derry last month has been remanded in custody for breaching her bail conditions.

23-year-old Bridget Mongan, from Stanley's Walk in the Bogside area of the city had been on court bail charged with assaulting her brother in Altnagelvin Hospital's high dependency unit last January.

As part of her bail conditions she was not allowed to be drunk in public, nor was she allowed to visit any hospital in Northern Ireland.

At yesterday's sitting of Derry Magistrate's Court a police officer told the court that on Sunday, a patrol responded to reports of anti-social activity in the John Street area. When they arrived they saw Mongan and she looked to be intoxicated in breach of her bail terms.
She was breathalysed and found to have a reading of 133 mgs which is almost four times the legal limit. When police tried to arrest her she attempted to run away and then threw herself on the ground and resisted police. She began shouting and swearing and had to be restrained before being placed in a police vehicle.
Police opposed bail as she had breached her conditions in the past and also that she faced serious charges. District Judge Barney McElholm said that he had given Mongan 'her absolutely final warning when she appeared on April 16 for another breach. Defence solicitor Mr. Seamus Quigley said his client would agree to any conditions in order to be released.
The judge said that he had warned her to stop her behaviour but she had continued. He sentenced her to 2 months in prison suspended for two years for resisting police yesterday. He then revoked her bail and remanded her in custody stating: "I couldn't rely on her to adhere to her bail at all."
Mongan will appear again on May 22.
Mongan is the centre of an investigation by the Police Ombudsman after footage appeared on social media sites showing her being lifted from the centre of the road by two police officers and then being left in a bus lane.
While the inquiry is carried out the officers involved have been taken off duties that would bring them in to contact with the public.

August 1, 2021
The Bishop of Raphoe is recommending that parishes begin to prepare for First Communion and Confirmation ceremonies from mid-August onward. However, in a letter to...