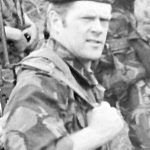 The PSNI has confirmed that it is re-examining the case of the IRA murder victim Lexie Cummings who was gunned down more than three decades ago.

A part-time member of the UDR, the 39-year-old was fatally shot in Strabane, Co Tyrone in June 1982.

No-one has ever been brought to justice.

In March 2012 DUP MP Jim Shannon used parliamentary privilege to name a public representative in Donegal who he believed was involved in the murder of Lexi Cummings.

Speaking today, West Tyrone MLA Ross Hussey said anyone with any information regarding this investigation should come forward:

July 27, 2021
Gartan National School has been approved to proceed to construction for additional school accommodation. The school is to receive a new mainstream classroom and assisted...

Purchasing of houses by Council may be halted until Mica crisis...

Hospitals stepping up preparations for surge in Covid admissions – Saolta...