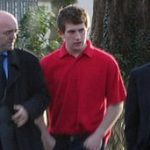 A County Tyrone teenager who killed his father will spend at least ten years of a life sentence in jail.

19-year-old Sean Hackett, was cleared of murdering his father, 60-year-old Aloysius, at their family home in Augher in 2013.

Instead, he was convicted of manslaughter on grounds of diminished responsibility.

The judge said that Hackett posed a significant risk and danger to the public for an unpredictable time.

He sentenced Hackett to life imprisonment with a minimum term of ten years to be served before he can be considered for parole.

He was also convicted on two charges of having a gun and ammunition with intent to endanger life.

The former GAA footballer had always admitted killing his father, whom he shot twice in the head, in the driveway of their family home in Augher, on 4 January 2013.

But he had denied murdering his father, who was a former chairman of St Macartan's GAA in Augher.

In their verdict the jury of six women and six men accepted the defence case that Hackett, was a mentally disturbed, deluded teenager on the possible verge of schizophrenia when he killed the father he professed to have loved.

The trial was described as one of the most extraordinary and complex criminal cases ever to come before the courts.