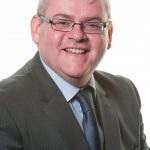 An Udaras board member and local election candidate in Falcarragh says there's no question of job opportunities being lost if Udaras supports the development of an addiction clinic in Ballyconnell House.

Fine Gael's John Curran, a supporter of the Cuain Mhuire plan, says he doesn't believe there is a groundswell of opposition, as was claimed by Seam Hillen who held a protest pnm Friday afternoon.

One of the claims made was that if the centre is supported by Udaras na Gaeltachta, it would take a significant proportion of its budget and compromise future job-creation opportunities for west Donegal.