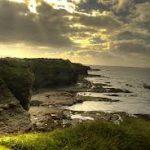 Gardai are trying to establish the identity of a body found washed up against the cliffs in Bundoran this morning.

The middle-aged man’s body, believed not to have been in the water for long, is the second deceased man discovered in the seashore in Bundoran within the past 10 days.

Gardai say this morning’s body, fully clothed, was found near the cliff-walk at the west end of the town.

Meanwhile, they have identified the body found last week as that of 60-year-old John Stenson, a native of Swinford, Co. Mayo, and who had an address at Turlough Rd, Castlebar.

Mr Stenson was last seen on March 24 after he booked into a hotel at Salthill, Galway. His decomposed body was found washed up on the shore at the Crest of the Wave estate in Bundoran on Tuesday last week.