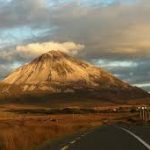 A young man is being treated at Letterkenny General Hospital after he was airlifted from Mount Errigal last night.

Two men were out walking on the mountain when one of the men got into difficulty at the top of the summit shortly after 7 o'clock.

Members of the Donegal Mountain Rescue team and the Rescue 118 helicopter from Sligo were called and after what's been described as a difficult rescue, the man was airlifted to hospital where he is being treated for leg and shoulder injuries.

Joe Brennan of the Donegal Mountain Rescue Team says it was a difficult rescue because of where the injured man was lying........