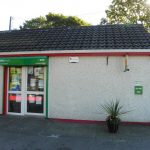 Fears have been raised today about the future of Lettermacaward post office, after An Post confirmed that it was considering its closure.

The threat comes following the announcement that the local postmaster in the parish is to retire at the end of June.