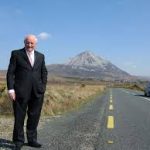 Donegal County Councillor Padraig O Doherty has made a u-turn and has confirmed that he will now stand in the local elections as an independent.

Just last week he told Highland Radio News that he was to rejoin Fine Gael, and had been put forward for convention to run for the party.

But Cllr Doherty says it was decided by Fine Gael HQ that the party would only run two candidates in the Glenties electoral area.

He says he will now run as an independent, and he says he is not disappointed he is not running for Fine Gael: